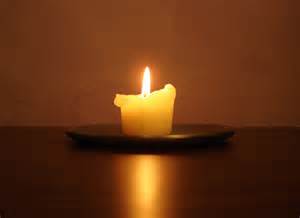 Jesus said, “You are the light of the world. A city built on a hill cannot be hidden. Neither do people light a lamp and put it under a bowl. Instead, they put it on its stand, and it gives light to everyone in the house. In the same way, let your light shine before others, that they may see your good deeds and glorify your Father in heaven.” (Matthew 5:14-16)

I was given a card with this quote on it this morning and it had a strong impact on me. It made me think about light and about how one candle can spread light to another and what effect that can have.

As usual, when I came from town, I said my usual ‘good morning’ to strangers passing by and smiled a genuine smile at the faces coming toward me on the path. Some people smiled back or nodded. Others didn’t but that’s ok too. Of course, that’s lovely if they do, that’s a bonus, but the important thing for me was to give out the light that was given to me this morning.

I don’t have a lot of money to spare (If there was some to be had, I could help so many). However, in the absence of gold coins, I decided that I could still give … giving could come in the shape of a kind word; a good deed; a gentle touch on the arm to a troubled man or woman; a tissue to wipe away his or her tears; a chat to a lonely soul … and so much more.

I stopped in the street and spent some time in conversation with an elderly man who was playing accordion in the street. He was playing his heart out but we could just hear one another above the music he was so obviously familiar with.

Then, I passed a tired-looking guy on the street who was obviously homeless. He had a hat in front of him, collecting money. All I could offer was to spend a little time talking to him. He turned out to be a fascinating man – he’d been a driver of a London bus for nearly twenty years. He had some tales to tell that beat any comic-strip you could find in a newspaper!

Just as I was walking toward the bridge, I saw a rough-looking, young man offering hand-made bracelets made from cotton thread. He was sitting making them as people walked by. Some folk stopped and looked; some glanced across at the placard propped up next to him. It read ‘I am no longer homeless. A local man gave me a room in his house but I have nothing to put in it.’ I stood for a few minutes and watched him crafting them and decided to make a small donation in exchange for a beautiful blue and lilac bracelet. He said thank you and I smiled at him and said thank you too.

I decided it was time I started heading home but just had to call in at Tesco’s for some milk. In front of me were bunches of fresh flowers in buckets which were too expensive for me but made me smile, just the same. I headed toward the milk aisle and just happened to come across the ‘bracelet man.’ He had a bottle of cider in his hand and was just picking up a second. I went up to him. We spoke. He looked surprised. I think he expected me to have a go at him for taking money off passers-by and then buying alcohol with it but I’d said, “nice to see you again; hope you have a good rest of the day.”

Why? Because I knew that, I was no-one to judge. I only said, “I understand. I’ve been there – done that – and worn the t-shirt.” I had been in a similar place myself, many years ago. I had my reasons as this man may have also. We should never judge someone until we have walked a mile in their shoes. Whoever you are, wherever you have been, whatever you’ve been through, it’s still possible to spread a little light (and a little love) – you never know where it might travel and who it might touch.

8 thoughts on “SHINE ON”