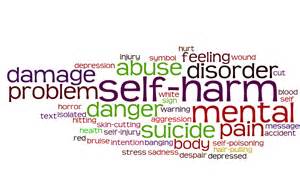 I decided to write about something quite personal and close to my heart. It is a sensitive subject for many people who suffer  or struggle with mental health issues. I realise that everyone will have different thoughts and feelings about this topic. However, I am speaking here of my own thoughts and emotions now, as a woman over forty-five years old, discovering I have very mixed feelings about this topic now, as I look back.

I’m talking about scars. A lot of people have scars – all sorts – scars from operations, from injuries, as a result of criminal acts, because of medical conditions and no doubt, many other reasons that I haven’t mentioned here. I am talking about ‘self-inflicted’ scars caused by self-harm. Self-harm can take many forms; in my case, they took the form of cutting, burning etc, severe and chronic anorexia, many over-the-counter drug overdoses and quite a few addictions over the years I was ill.

In my opinion, the public’s view of ‘self-inflicted‘ injury is often inaccurate. Yes, I was in control of my actions (sic) but those actions were not the underlying reason for my self-injurious behaviour. I was often unfairly labelled by hospitals as a self-harmer/attention seeker which wasn’t the case. In most instances (as with a huge majority of cases), I was carrying out actions which were mainly caused as the result of having serious abuse inflicted on me over a long period  but the person or people who ought to have been held accountable for my trauma never were, and rarely are.

I’m not going to discuss any further detail about the whys and wherefores of my self-damaging behaviours which became a way of life for very many years. I am now speaking of the present and the future. Currently, as a mature woman, I  very frequently find myself feeling awkward or embarrassed because I have many old and quite unsightly scars all the way up both arms. It is summer again and we’ve had some hot, sunny days and this always creates a dilemma about whether to wear long sleeves or not.

That isn’t because I carry endless shame or guilt about my scars – to me, they are evidence that I survived an extremely dysfunctional and seriously traumatic childhood which also continued into some years of my adulthood. However, I do find, as a mature woman, that it is unusual to see such scars on somebody of my age and that people often do notice this and sometimes I feel stared at for a little too long than to be comfortable. Occasionally, I have had the experience of being the subject of a shared snigger between two people who obviously have no understanding of mental health or are just appear ignorant when pointing and exclaiming. “ugh or eww – what have you done to your arms?”

I do find there are many situations where I feel I have to cover up with (simply to spare other people’s own fear and embarrassment). There are some instances where I, myself, would feel uncomfortable, misunderstood or perhaps even judged, such as in the company of some older people, going to an interview, family gatherings (such as weddings) where those gathered are fairly distant relatives who don’t know much, if anything, about the truth of my past and even in my church, strangely enough (perhaps it’s because I’ve not at this church during a summer before).

I also find that  a few of my  Carers, particularly when they first start working with me, don’t quite know what to say, especially if they are helping me shower and dress when my scars are painfully obvious. I usually put them out of their misery by talking about it openly rather than attempting to hide it rather uncomfortably behind the shower screen.

I’m aware that this post has ended up rather longer than I first intended it to but as you can see, it is something that I feel passionately about. I am very happy to chat with any readers who want to understand a little more, or perhaps share their own experiences with me if they have been affected in a similar way and are feeling alone or isolated. You can find my email address at the top of the page in the ‘Contact me‘ section.